In “Wheat Belly” Dr. William Davis, a preventative cardiologist, helps us to understand the multi-faceted, widespread and far-reaching problems with the so-called “staff of life” that has come to dominate the landscape of American food. He walks the reader through the history of the wheat plant, from its roots as an ancient grain to its current state as a modern, ubiquitous, genetically modified franken-food. He covers the difference between hybridization of many plants, which can result in perfectly healthy foods to eat a la Gregor Mendel and his pea plants (high school biology, anyone?), versus the hybridization habits of wheat which act very differently and may be at the root of many of the problems of modern wheat. Davis also discusses the genetic modification of wheat.  Additionally, Dr. Davis explains to us that “the peculiar oversight in the flurry of breeding activity… was that, despite dramatic changed in the genetic makeup of wheat and other crops, no animal or human safety testing was conducted on the new genetic strains that were created.” (p. 25)

“Genetic differences generated via thousands of human-engineered hybridizations make for substantial variation in composition, appearance, and quantities important not to just chefs and food processors, but potentially also to human heath.” (p. 30)

Dr. Davis helps us to clearly understand some of the major differences between the physiological response to wheat as we eat it versus other grains, carbohydrates and even other sugars, for that matter. It's Davis' position that the unique structure of wheat's complex carbohydrate makeup, 75% amylopectin and 25% amylose, is the major contributor to the blood sugar dis-regulation caused uniquely by wheat and wheat-containing products. And while we may eat other complex carbohydrate-rich foods and experience blood sugar spikes, the response to wheat is more severe and more problematic.

“The complex carbohydrate amylopectin is rapidly converted to glucose and absorbed into the bloodstream and, because it is most efficiently digested, is mainly responsible for wheat's blood-sugar-increasing effect… Aside from some extra fiber, eating two slices of whole wheat bread is really little different, and often worse, than drinking a can of sugar-sweetened soda or eating a sugary candy bar.” (p. 32,33) 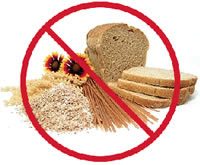 While Dr. Davis spends the beginning portion of the book building a case against wheat for its high blood-sugar and diabetes-promoting effects, he goes on to explain how wheat is at the root of nearly all other forms systemic breakdown as well. There is almost a nearly endless list of body systems, tissues and processes that are negatively affected by wheat and Davis details many of them along with how these problems occur. He explains how ill-health resulting from wheat consumption is not all about gluten and details the head-to-toe destruction of health that can ensue upon consumption of this modern marvel of science. He also presents case-studies of various patients who presented with symptoms seemingly unrelated to diet, or so they thought. All of these case-studies provide compelling, first-hand testimony to how life-changing simply removing certain foods from the diet can be.

“For some people, wheat is addictive. And, in some people, it is addictive to the point of obsession… Understanding that wheat, specifically exorphins from gluten, have the potential to generate euphoria, addictive behavior, and appetite stimulation means that we have a potential means of weight control: Lose the wheat, lose the weight.” (page. 44)

From schizophrenia, depression and brain fog to cravings and appetite stimulation, it's Davis' proposition that wheat is affecting our brains. Significantly. But perhaps even more significant is the effect that wheat is having on our waistlines. Combine the addictive properties in the exorphins in wheat with the carbohydrates and fat (food-reward, anyone) in refined and processed foods and you have a perfect storm for obesity.

“From the perspective of the seller of food products, wheat is a perfect processed food ingredient: The more you eat, the more you want.” (p. 60)

And while we're upset about the way that we look with a “Wheat Belly,” the real problems are metabolic and systemic since the fat we gain in response to this “heart-healthy food” largely accumulates around our organs.

“Visceral fat filling and encircling the abdomen of the wheat belly sort is a unique, twenty-four-hour-a-day, seven-day-a-week metabolic factory. And what it produces is inflammatory signals and abnormal cytokines, or cell-to-cell hormone signal molecules, such as leptin, resistin and tumor necrosis factor. The more visceral fat present, the greater quantities of abnormals signals released into the bloodstream.” (p. 61)

A full, clear and detailed description of celiac disease is included in “Wheat Belly,” as it's the most extremely diagnosed allergy to wheat that exists. Whether or not you have been diagnosed positively, however, Davis explains that presenting with symptoms of gluten allergies or even slight intolerances are affecting our health. While digestive distress and failure to thrive in children had previously been the most obvious effects of Celiac Disease, the affliction may result in no symptoms at all on a regular, daily basis for many years but may present later in life as neurological impairment, incontinence, dementia or gastrointestinal cancer. Some other conditions that are markedly connected to “latent” celiac disease or, as Davis calls it, immune-mediated gluten intolerance, include dermatitis herpetiformis, liver disease, autoimmune diseases, insulin-dependent diabetes, neurological impairment and nutritional deficiencies.

While all of this sounds like a story out of a science-fiction novel or like some sort of complex conspiracy theory, the reality is that we are playing with fire when we consume wheat products. These foods are marketed to us as healthy, but we've only seen a decline in health since abandoning traditional foods and saturated fats in animal products for the adoption of wheat and other refined grain products. Davis's propositions as to how wheat is negatively impacting our health line up extremely well to many of the principles talked about when adopting a pre-historic, Paleo or primal type of diet that shuns grains all together as any regular part of the diet. By doing so, we can more easily manage insulin and other metabolic hormones in the body, maintain proper pH levels, slow aging, decrease risks of heart disease, keep your brain thinking clearly and your waistline looking attractive.

Dr. Davis sets us up witha a 7-Day Wheat-Free meal plan including recipes at the end of the book. There are a few dietary recommendations that I would not agree with, but overall the plan looks mostly like a standard Paleo diet. The items I'd not want someone to include are artificial sweeteners (the doctor recommends Truvia, but I wouldn't touch it with a 10-foot pole) as well as some soy milk (which I don't recommend for estrogenic and antinutrient properties as well as production methods unless it's homemade) and tofu here and there and refers to the tofu as a fermented soy product, but I don't believe that most American tofus are fermented (if they were I'd still say to consume in VERY limited quantities anyway).

As much as putting down the bagels sounds difficult (or nearly impossible) at first, it does get easier- especially when a healthier, happier and EASIER life awaits on the other side. If you've been on the fence about whether or not giving up wheat might benefit your health, I highly recommend reading this book. I would also recommend it if you're ever faced with trying to educate someone else as to the powers of this seemingly innocuous food formerly known as the “staff of life.” I propose, and I bet Dr. Davis would agree, that we call wheat what Robb Wolf calls it, Satan's excrement, instead.

You can read more from Dr. Davis on his blog, on Facebook and follow @wheatbelly on Twitter (though to-date he has yet to Tweet). He has also been featured on several popular podcasts recently including The Paleo Solution Podcast and The Underground Wellness Radio Show Podcast.

Nice to meet you!

Hey there, I'm Diane. I'm a Certified Nutrition Consultant and the New York Times bestselling author of Practical Paleo and The 21-Day Sugar Detox. It's my mission to empower you to live a better life through real food nutrition, advice on entrepreneurship, and beyond.